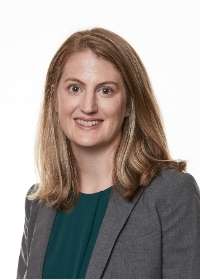 Laura N. Anderson, PhD, is an Assistant Professor in the Department of Health Research Methods, Evidence, and Impact (formerly the Department of Clinical Epidemiology and Biostatistics) at McMaster University. She completed a Master’s degree in the Department of Epidemiology and Biostatistics at the University of Western Ontario, and PhD in Epidemiology at the Dalla Lana School of Public Health, University of Toronto. Dr. Anderson’s research interests are population and public health, chronic disease prevention, and understanding the modifiable determinants of health in early life. Her research focuses on the methods for measuring population health, life-course epidemiology, evaluating population health interventions, and the analysis of secondary data. She is an investigator on multiple CIHR funded projects related to obesity across the life course.

Sugar containing beverages (SCB) are a leading source of sugar intake in children and are a risk factor for obesity. The Ontario Ministry of Health and Long-Term Care developed and implemented the Healthy Kids Community Challenge (HKCC) from 2016-2019 to promote children’s health. The HKCC was a community-based population health intervention. The aim of our study was to evaluate the impact of the HKCC on SCB intake. We conducted an impact evaluation of the HKCC in 4 communities in the Toronto Area using longitudinal data from the TARGet Kids primary care research network. A non-randomized intervention study was conducted using pre- and post- HKCC intervention data from children 0-12 years of age with a concurrent control group. Propensity score matching and generalized linear mixed-effects model were used to estimate the change in SCB intake over time. A total of 584 children from intervention communities and 1166 matched controls were included in the analysis. There was no evidence that the change in odds of SCB intake in HKCC neighbourhoods was different than non-HKCC neighbourhoods after the intervention start date of January 2016 (β = 0.16; 95% CI: -0.12, 0.43). Our preliminary results suggest that the HKCC community-based intervention had no impact on SCB intake in our study population. Evidence from this study may inform the design and methodology for future population health interventions to sugar intake and improve the health of Canadian children.